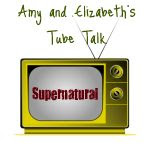 It's Tube Talk time again! Amy and I have been watching and discussing season 1 of Supernatural, and today it's time to break down a few more episodes. I'll be talking about episode 6 - Skin, and episode 7 - Hook Man. Head on over to Amy's blog, My Friend Amy, where she will be recapping episode 8 - Bugs, and episode 9 - Home. Let's get busy!

Recap - A pretty girl is tied to a chair, struggling and obviously needing help. A SWAT team is moving in to

rescue her - she motions to the other room, and they burst in to see the guy who did this to her. He turns around, and we see - DEAN!?!?!

Meanwhile, Sam gets a message from an old college friend, that another friend has been arrested for murdering his girlfriend. Sam knows his friend must be innocent, and so the brothers decide to investigate. Sam's friend, Rebecca, is happy to see them, but doesn't really know what they can do to help - apparently, Sam isn't telling his friends everything about his new job. The boys find out that another woman has been tied up and beaten. The common thread between the two cases is that each perpetrator was seen by someone at another location, while they were supposedly commiting the crime. The boys have their suspect - it's a shapeshifter!

Here's the conversation Amy and I had - Amy's words will be in red.

So, I was completely shocked at the beginning when the bad guy turned around - and it was Dean! I think that was one of the scariest things I've seen so far in this show - what did you think?


That whole scene was very scary!!

This episode finally addressed some of the issues between the brothers I had been wondering about - namely, whether or not Dean resented Sam for breaking free from their life for a while. Do you think the shapeshifter's thoughts were really Dean's, or was he just saying what he thought would get a reaction from Sam?

I think it's possible these were truly his thoughts at their most extreme. Sometimes I have bad negative thoughts about people, but they aren't my TRUE thoughts. And so I think th

at it's possible that's what was going on...finding the darkest root of any resentment and negative thoughts Dean harbored.

I really think that Dean hides a LOT from Sam - emotionally and psychologically. I wasn't surprised at all to hear those thoughts coming from him. I just wonder what else he is hiding.

I think this episode was really brilliantly done - making a character we've come to know and care about for several episodes suddenly "become" the bad guy - especially during the scene with the shapeshifter and the girl-of-the-week in front of the fire, I was pretty creeped out by the dark side of Dean's charm. Did you ever find yourself forgetting it was a shapeshifter, and really being scared of Dean?

I don't think I thought I forgot it wasn't Dean, but that's a good point about the dark side of Dean's charm. He could so easily be that guy...and that's scary.


I think this is the first time they've given us an actual hint as to the backstory of the villian - the shapeshifter talked about being born, and being human, until something happened to change him. Did you like getting to know more about the villian, or would you rather they just stay generic bad guys to get killed off?


I like origin background and information, so I wouldn't mind if they got a little deeper into that with the bad guys each episode. But most importantly, I want to see them killed, ha.

I always like backstory - sometimes, it's better than the real story. And I like knowing motivations, so it worked really well for me.


I was really struck by the homages to famous, tragic monsters in this episode - the shapeshifter managed to channel Frankenstein's monster, and a little bit of the Phantom of the Opera during his conversations with various people - he almost ended up slightly sympathetic to me.
Ah, the sympathetic monster is a dangerous thing! :)


Yeah, I was always a sucker for the Phantom. I think that's why having the shapshifter look like Dean was so affecting for me - I'm already predisposed to feel sorry for him!


If you'd like to read more, here is some information about shapeshifting myths, including Dopplegangers and werewolves.

The infamous "Hook Man", a vengeful spirit who kills his victims with a shiny hook that serves as his hand, terrorizes a small college town in Iowa. Sam and Dean learn that all the victims are connected to the daughter of a local minister and race to find and destroy the Hook Man's bones before he comes for them.

(why did I not realize these recaps existed before? WAY easier than typing out my own...and probably make more sense!)

Our converstation - again, Amy's words are in red.

Okay, first of all, as an Iowan, there is NO Eastern Iowa University. I'm just sayin...

Did I realize you were an Iowan? I lived in Mason City for 5 years growing up!

So I wasn't that thrilled with this episode, honestly. I'm not sure why, it just didn't capture my interest as much as the others. I know this because I had to watch it 3 times, after falling asleep the first two. =)

I like this old urban legend, but you're right this one didn't really stand out a whole lot. However, I watched this one at my mom's before starting the readathon and it was enough to get her hooked on the show!

Well, it was entertaining, just not as good as the other episodes, I think.

It seemed weird to see Sam kissing another girl, not that long after Jess died. Isn't it too soon for him to be falling for someone else?

Yes, and he realized it himself!

Any other thoughts on this one?

Like you said, this episode didn't really stand out or add anything to the mythology of the show. It was just sort of there!

Yeah, I definitely like the mythology episodes more than just the monster-of-the-week episodes.


If you'd like to read more, here is some information about the Hook Man legend.

That's all for me - make sure to stop by My Friend Amy to see our discussions about Bugs and Home!
Posted by Elizabeth at 10:29 AM