Her name is Binti, and she is the first of the Himba people ever to be offered a place at Oomza University, the finest institution of higher learning in the galaxy. But to accept the offer will mean giving up her place in her family to travel between the stars among strangers who do not share her ways or respect her customs.

Knowledge comes at a cost, one that Binti is willing to pay, but her journey will not be easy. The world she seeks to enter has long warred with the Meduse, an alien race that has become the stuff of nightmares. Oomza University has wronged the Meduse, and Binti's stellar travel will bring her within their deadly reach.

If Binti hopes to survive the legacy of a war not of her making, she will need both the gifts of her people and the wisdom enshrined within the University, itself - but first she has to make it there, alive.

This was a really interesting novella. I've tried to read Nnedi Okorafor's novels previously, and for whatever reason couldn't maintain interest long enough to make it past the first few chapters. This story, however, really hooked me in from the very beginning, and I finished the entire thing in a single afternoon.

I thought Binti's world was extremely well fleshed out for such a short work - I feel like I understand politics and beliefs that are often lost in must longer works of speculative fiction. I thought Binti as a character was fascinating, and the dilemmas she faced and worked through felt true and honest. I found the resolution to the story a bit abrupt, but am willing to give that a bit of leeway since this was a novella - obviously, the author didn't have much time for long, drawn-out scenes of hashing out problems.

I was uncertain of this author, but this story has made me a fan. I will definitely give her novels a try, and I can't wait for the next installment in Binti's world!

We are really enjoying the show Greatest Hits on ABC - some of the performances are surprisingly good, and some remind us why it's better that pop music has just moved on.....

I'm not ashamed to say that I've been a fan of Hanson - those boys just make good music. I loved this performance of their most famous song, and it made me think I'd have a great time at their concert. These boys are pretty darn talented, even in a silly song like this.

YouTube is so big, and I'll never see even half of what's available, but sometimes I find something new that seems like I should have known about it already.....did you know about these Crash Course Literature episodes?? Author John Green breaking down great books? I'm loving it, and the only thing I'm mad about is he hasn't made a new episode in 2 years. Give us some more books, John!!

On Saturday, I will be here. Can't wait. Vacation = bliss. 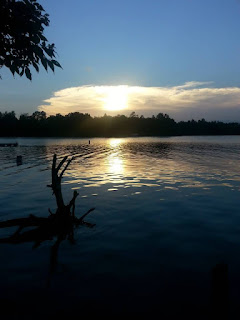 What's making YOU happy this week??
Posted by Elizabeth at 7:22 AM 2 comments:

This book is two things. First - it’s a raw conversation filled with honest reflections about life and faith. Like the one you’d have at a dingy bar, hole-in-the wall coffee shop, or a cross country road trip. Second and more importantly - it’s a witness to unfair and undeserved grace. It’s a witness to ups and downs, a few beautiful mountain tops, and even more dark and dangerous valleys. It’s a witness to the Divine crashing into my life and hunting me down with His furious love. On this road trip with me you’ll pick up hitchhikers with names like depression, heart break, and loss, and although they will stay with you for a while, they won’t make the whole trip with you. You’ll reflect on their purpose with the eyes of mercy, the lenses of hindsight, and the visionary hope of forgiveness. What you’re about to read is my story. My ragamuffin story. And in my story I have discovered God chasing me down with his furious love through the sinners and saints that have shipwrecked into my life. But my greatest hope in our time together - should you dare to pick up this book - is that you will read my story and forget my story and fall in love with Jesus. I pray that my story will fade into the background and your story will take center stage - so that you too can see where God was and is, where He is ready and waiting to tackle and ambush you with his incomprehensibly tender and overwhelming love.
My thoughts -

I'm not sure I've ever read a work of Christian nonfiction as honest and raw as "Sinners, Saints, and the Furious Love of God." I've read a bunch that are more polished; a few that are funnier; several that are destined to be more popular in churchy circles. But I don't think I've ever read a book by a Christian author who has chosen to lay himself bare in quite the same way as David Leo Schultz (yes, he uses all three names).

This is a not a book that will be remembered for its lovely prose, or its gracious technical skill. (Not a secret - the author discloses early on that punctuation rules are not particularly a concern.) Editing might have made it more presentable, but it also would have erased much of what is the soul of this book - the message that practically vibrates throughout every page - we are loved furiously, recklessly, unconditionally, by the God who made us all.

Schultz takes his readers on a road trip of sorts, over back roads and past all-night diners, through the highs and lows of a life marked by some success and more struggle, inviting his reader into a conversation that feels uniquely intimate. His honesty is refreshing, and sometimes almost uncomfortable, but it's that honesty that makes his reader trust him. This is not an author out to impress, or to make his own words leave a lasting impression - his message is the only goal, and that message of love is for everyone. Literally everyone.

This is a book to be read, and re-read, and then read again. It won't be the most popular book I read this year, or the best selling, but it might be the most important. Highly recommended. 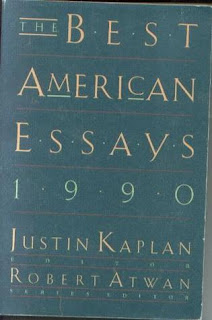 I collect these books, because I think they sound like such a good idea, and then never get around to reading them. So, this year, I'm going to start reading them. From my shelves. 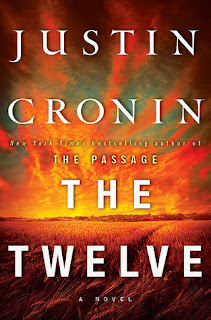 The Twelve by Justin Cronin

A re-read, because I have the third and final in the trilogy which just came out this spring. I have enjoyed the first two novels very much, and I'm looking forward to completing the story. From my shelves. 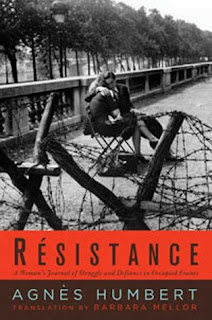 Resistance: A Woman's Journal of Struggle and Defiance in Occupied France by Agnes Humbert


My current non-fiction read. From my shelves. 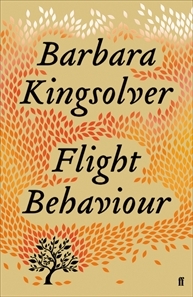 
On loan from my mom. I'll be seeing her in a couple of weeks, so I'm hoping to return this to her then.


What's on your nightstand??

Labels: #ReadMyOwnDamnBooks, state of the stack

We all know of my love for Hamilton: The Musical. This past Saturday, creator Lin-Manuel Miranda, along with primary actors Phillipa Soo and Leslie Odom, Jr., took their last curtain calls on Broadway. It was a lot of fun to be able to watch that curtain call live. Before their last show, The Schuyler Sisters gave us one last, beautiful song to remember them by -

I cannot stop watching this. The level of brilliance required to conceive of, and then execute, something like this - amazing.

I know I'm not the only one enthralled with the story of A Song of Ice and Fire. (Game of Thrones for those who just watch on HBO). This combines my love of the books with my nerdy love of history.....spoiler alerts, this follows the timeline of the novels, so fans who just watch the show might find a few differences.....

What cool things have you discovered lately?
Posted by Elizabeth at 4:30 AM 3 comments:

But when your whole life gets swept up by a tornado - taking you with it - you have no choice but to go along, you know?

Sure, I've read the books. I've seen the movies. I know the song about the rainbow and the happy little bluebirds. But I never expected Oz to look like this. To be a place where Good Witches can't be trusted, Wicked Witches may just be the good guys, and winged monkeys can be executed for acts of rebellion. There's still a yellow brick road - but even that's crumbling.

They say she found a way to come back to Oz. They say she seized power and the power went to her head. And now no one is safe.

My name is Amy Gumm - and I'm the other girl from Kansas.

I've been recruited by the Revolutionary Order of the Wicked.

I've been trained to fight.

And I have a mission.
My thoughts -

I REALLY, REALLY wanted to like this book. And I didn't not like it, exactly. I found the premise to be extremely interesting, and the new characters the author introduced had a lot of potential. My problem is that by the end of the book, basically nothing that the author promised in the book description had actually happened.

That's not to say NOTHING happened. There were lots and lots of things going on, almost all the time. Every page had some new situation Amy had to extricate herself from. It just wasn't the situations I expected - this just wasn't quite the book I wanted it to be. So, probably, my bad.

But also, Amy never really became a character in her own right. She seemed like a girl who had a lot of things happen to her, but I never quite got to the point where I cared. As a character, she isn't the person I am actually interested in in this story, and as a reader that's concerning to me.

Now, as I said before, I didn't NOT like it. There were enough seeds that piqued my interest that I will be reading at least one more book in the series. I'm hoping for more depth, however, or I might never know if Dorothy does, indeed, die.