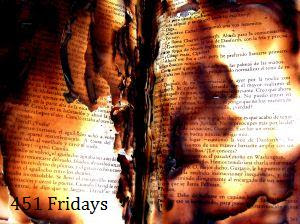 
Today, I have the privilege of welcoming Amy, from My Friend Amy, to 451 Fridays. I think her blog might be the very first one I ever started reading - I am almost positive it's the first one I ever commented on. I'm not sure there is anyone friendlier in the blogging world, and she is the host of a whole variety of cool things - most especially, Book Blogger Appreciation Week, which is an awesome event.


What 5 books do you believe are important enough to be saved, and why?

Jane Eyre by Charlotte Bronte
It's one of my favorite books of all time and is just the kind of story we need to have around for as long as possible. I fell in love with it and became obsessed with the Brontes for a short while after reading it. I mean really. Plus, it's miles better than Wuthering Heights. Not that we're comparing bo 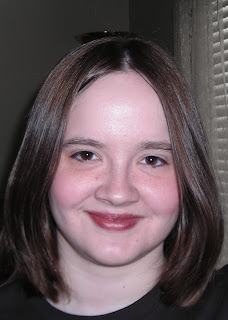 Mere Christianity by CS Lewis
If nothing else, we'd have plenty to talk about! This is a great book for hashing out issues of Christian faith. Of course, that would leave out all other peoples of different faith, but I'm sure they'd be saving their books.

The Secret Diary of Adrian Mole Aged 13 3/4 by Sue Townsend
I think we'd need to laugh since we'd be living in some sort of book banning world and I pretty much can't think of anything more depressing. Who doesn't love Adrian Mole?

Silence by Shusaku Endo
On the other hand, there's nothing like a depressing book to remind you of how good you've got it. So we'd definitely need this one around, to remind us that even though God seems silent in our book hating world, at least we're not Japanese Christians getting tortured to death or missionaries being forced to make impossible decisions. (and yes I love this thought provoking book)

The Best Christmas Pageant Ever by Barbara Robinson
We read this every Christmas growing up...sometimes we need to be reminded about the unexpected packages that carry grace.


Of those 5, which book would you choose to "become"?

Of course I would become Jane Eyre. To this day, it is the kind of book that reminds me what fantastic characterization is and what it feels like to fall into the pages of a book and never want to come out.

Amy, thank you so much for taking the time to share with us YOUR list of books which must be saved. Next week, Kathy from Bermudaonion's Weblog will be joining me to share her list. If you would like YOUR list featured, send me an email and we will chat!
Posted by Elizabeth at 5:22 AM

Another great list of books! And Jane Eyre would be a fabulous book to be!

Thanks for sharing, Amy!!

Amy is so cute! I love her list too.

Such good choices, Amy. Unfortunately, I think I will have to leave this blog, as my TBR pile is now perilously tall and threatening to topple and crush me under the weight of unread books. Too tragic! (Really, JK)

What ...no playboy ??? LOL Just kidding everyone, mine would be To Kill a Mockingbird.

Amy, we could share Jane Eyre. One of us could be young Jane and the other older Jane? (I'd like older Jane please. All those Rochester scenes. sigh)

Amy, you've gone and given me yet another reason to finally get around to reading Jane Eyre sometime this century! I love the unconventional selections, and I wholeheartedly agree about the Christmas pageant book. It's a keeper.

What a great list of books. This is my first time on your blog and I am happy that Amy provided the link from her site. I'll add you to my google reader and check back.

Good list! I definitely agree with finding books that show the range of human experience and emotion ...

Great list. I absolutely love the idea of this feature. I have no idea how I'd narrow my collection down to 5 choices...going to have to give this some thought.

I don't think I've read any of those books. So, so sad.

Amy, you and I are more similar than we know!! "Jane Eyre" is the first book that came to mind! I lived and breathed Bronte sisters for years!! Jane Eyre is my favorite book of all time. Catapulted me into the voracious reader I am now! I agree with your "Mere Christianity" as well!! I don't know the other 3, but I enjoyed your explanations of them all!

Blessings,
Mimi B
Woven by Words

Great books Amy. I'm with you on Jane Eyre. I'm going to reread it this year for the Classics Challenge.

Thanks for the support everyone! I'm so glad so many of you like Jane Eyre, too!

yay for Jane Eyre. Seriously, I had no idea I was going to love that book half as much as I did! Made me want to kick myself for not reading it sooner.

Thanks to everyone for stopping by, and to Amy for her great list. Three cheers for Jane Eyre!

Mom - if you try to leave the blog, I'll just send you all the posts by email. HAH!

Great list! I just read Jane Eyre for the first time and thought she was a wonderful character ... I wish all woman were as strong and principled as Jane!

And I read the Adrian Mole books ages ago but they were hilarious! Thanks for reminding me of them ... I'll have to see if I still have them around somewhere.

And I enjoyed reading your thoughts behind your choices ... very interesting.

This is such a great series of posts!