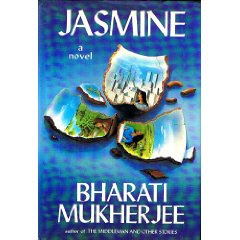 When Jasmine is suddenly widowed at seventeen, she seems fated to a life of quiet isolation in the small Indian village where she was born. But the force of Jasmine's desires propels her explosively into a larger, more dangerous, and ultimately more life-giving world. In just a few years, Jasmine becomes Jane Ripplemeyer, happily pregnant by a middle-aged Iowa banker and the adoptive mother of a Vietnamese refugee.

Jasmine's metamorphosis, with its shocking upheavals and its slow evolutionary steps, illuminates the making of an American mind; but even more powerfully, her story depicts the shifting contours of an America being transformed by her and others like her — our new neighbors, friends, and lovers. In Jasmine, Bharati Mukherjee has created a heroine as exotic and unexpected as the many worlds in which she lives.

Initially, I thought this was going to be another novel to put in my Sunday Shorts post of books that didn't really capture my imagination. However, when I realized I was still thinking about it several days later, I decided maybe it deserved a post of its own after all.

This is, upon first glance, a novel about the immigrant experience in America. Jasmine, and her adopted son, Du, both experience the ups and downs of navigating a new world. The story jumps around in time a bit, so it can be confusing until you are able to figure out exactly what the timeline is. Jasmine's observations about the strange and difficult ways of Americans are funny and pointed, often uncomfortably observant about the life her new country leads:

"In America, nothing lasts. I can say that now and it doesn't shock me, but I think it was the hardest lesson of all for me to learn. We arrive so eager to learn, to adjust, to participate, only to find the monuments are plastic, agreements are annulled. Nothing is forever, nothing is so terrible, or so wonderful, that it won't disintigrate."

She sees the irony of people telling her she fits in - that she is "doing well" - because well, as she is aware, is all a matter of perspective:

"At school they say Du's doing so well, isn't he, considering. Considering what? I want to say. Considering that he has lived through five or six languages, five or six countries, two or three centuries of history; has seen his county, city, and family butchered, bargained with pirates and bureaucrats, eaten filth in order to stay alive; that he has survived every degredation known to this century, considering all those liabilities, isn't is amazing that he can read a Condensed and Simplified for Modern Students edition of A Tale of Two Cities?"

But deeper than that, this is a novel about naming your own destiny. Jyoti becomes Jasmine when she stows away to America, and then Jase when she lives with the ultra-cool New York couple, and then Jane when she moves to Iowa. Each of these names brings a shift in personality, and the power of naming is subtly examined with each shift. I think part of the reason I wasn't sure I liked the novel initially is because I don't think I like the choice she ultimately makes, and the persona she finally chooses. Of course, that eventually makes me realize exactly how real Jasmine is to me - real enough that I want to read another chapter, or five, to see if that choice actually does end up being the right one.

It's an interesting novel - not high adventure, but a great deal to think about. It may not be my favorite of the year, but I'm certainly glad I read it.

Don't just take my word for it! Here's what another fabulous blogger had to say:

Natasha at Maw Books Blog
Posted by Elizabeth at 5:11 AM

I read this one in college. I don't remember too much about it, which is funny since I had to write a paper about if for my Literary Theory class. Maybe it's time to dig it out again.

--Anna
Diary of an Eccentric

I've not even heard about this book. The passages you mentioned from the book were lovely. I am adding this to my wishlist. Thanks for the review Elizabeth.

I may look for this one because I do love a good immigrant story.

Anna - I bet this would have been very interesting to discuss in a college class.

Violet - I hope you enjoy it!

bermuda - it's a good example of the immigrant narrative - I think you'd like it.

you read such interesting books. now i have to put this on my list too.

I also had never heard of this book, but the excerpts you posted make this seem like a very intriguing read. I stories that deal with the immigrant experience, and I have put this book on my wish list. Thanks for the great review!

Hadn't heard of this book and from your review it sounds more interesting than some of the better known immigrant stories/novels that I've read. Will look out for this book, thanks for the review!

It is a very interesting book for especially those who are immigrants from pakistan or India...variations in their life mirrors the life of jasmine.It has so much interesting chapters in it.i found it close to my life, as I came from Pakistan very young.Though from a literate family I got married and left my studies behind. I struggled hard to cope with the society, but now I've got 2 girls and I am doing bechelors from Middlesex university london.