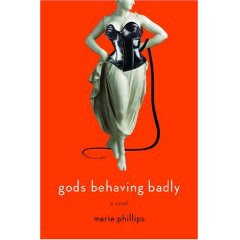 Being a Greek god is not all it once was. Yes, the twelve gods of Olympus are alive and well in the twenty-first century, but they are crammed together in a townhouse-and none too happy about it. And they've had to get day jobs: Artemis as a dog-walker, Apollo as a TV psychic, Aphrodite as a phone sex operator, Dionysus as a DJ.

Even more disturbingly, their powers are waning, and even turning mortals into trees--a favorite pastime of Apollo's--is sapping their vital reserves of strength.

Soon, what begins as a minor squabble between Aphrodite and Apollo escalates into an epic battle of wills. Two perplexed humans, Alice and Neil, who are caught in the crossfire, must fear not only for their own lives, but for the survival of humankind. Nothing less than a true act of heroism is needed-but can these two decidedly ordinary people replicate the feats of the mythical heroes and save the world?

I'm not entirely sure what I was expecting when I picked this book up - I know I wasn't expecting chick-lit with Greek gods. I guess I'm not sure why - I knew about the gods, I knew about the budding romance....I've even read reviews about it, which is why I added to my list for the Book Buddy Blogger challenge. It just didn't quite turn out to be what I thought it was supposed to be.

Now, that doesn't mean it was bad. It was actually a pretty entertaining little twist on the chick-lit genre. The introduction of Greek mythology allowed for some plot advances that wouldn't normally be attempted - the storming of the Underworld, for example. Neil and Alice were so sweet, and charming, and completely, almost boringly NORMAL, that is was easy to understand how perplexing and overwhelming the circumstances of the novel could be.

One of the things that has always fascinated me about the Greek pantheon of gods is how very nearly human they can often be. In Christianity, God is the essence of everything good and pure, and very unlike the humans that were created. Greek gods, however, are a very different story - they are quarrelsome, and lecherous, and cruel, and petty - very much like the people they rule. And in this novel, they are just what you would expect, with modern-day technology thrown in to the mix. Which is to say, this is definitely an adult novel, with the gods engaging in some decidedly adult behavior.

Overall, I thought it was a light, fun read. If you, like me, are starting to look for something to read on the deck, or by the pool, lemonade in hand, I think this would be a great choice.

Serena at Savvy Verse and Wit
Julie at Booking Mama
Michele at A Reader's Respite
Sheri at A Novel Menagerie
Anysia at Booklorn
Anna at Diary of an Eccentric
Posted by Elizabeth at 5:20 AM

I am looking forward to reading this one. I'm glad you mentioned that it is chicklit. I knew it was light, but this way I'll be better prepared going into it. :-) Great review!

I've been looking forward to this one ever since I heard the author on Blog Talk Radio. She's a hoot.

Have you ever seen that new show, Cupid? I think it is pretty humorous.

Thanks for the link. I actually really liked this book.

I'm never one to toss aside chicklit, unless it's really awful: all sex and no substance. This, at least, seems like someone's trying. I'll definitely add it to my beach list. Thanks!

I just ordered this book for the summer. I am glad you enjoyed it, even if it was not what you were expecting. Great review!

I adored this book!! Though it never occured to me to call it chick lit!?!!??

It is a fun, bawdy little read ... and you are right ... the Greek/Roman gods always did seem very "human."

I really loved this little novel. Hilarious. I've linked to your review! Thanks for linking to mine.

Julie - I liked how the author brought the gods to life!

Literary Feline - I thought it might make a difference to some - it wasn't exactly what I was expecting.

Rebecca - I have watched several episodes of Cupid, and I liked it. It's a fun idea. I hope it will be back next season!

Connie - this was a pretty good example of the genre, I thought.

Zibilee - I hope you enjoy it when it comes up on your stack!

Jenners - I guess the romance-y aspects of it felt like chick lit to me.

Serena - you're welcome! It was fun.