By the Chapter, Day 3 - Nineteen Minutes by Jodi Picoult 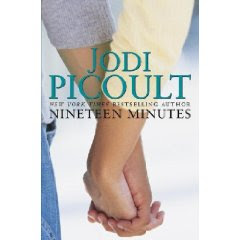 Welcome to the final day of By the Chapter. Marcia and I have been reading and discussing Nineteen Minutes by Jodi Picoult. You can read Marcia's day 1 post, and my day 2 post if you need to catch up. Be sure to stop by The Printed Page today to read Marcia's final thoughts on this novel.

Sterling is a small, ordinary New Hampshire town where nothing ever happens -- until the day its complacency is shattered by a shocking act of violence. In the aftermath, the town's residents must not only seek justice in order to begin healing but also come to terms with the role they played in the tragedy. For them, the lines between truth and fiction, right and wrong, insider and outsider have been obscured forever. Josie Cormier, the teenage daughter of the judge sitting on the case, could be the state's best witness, but she can't remember what happened in front of her own eyes. And as the trial progresses, fault lines between the high school and the adult community begin to show, destroying the closest of friendships and families.

Nineteen Minutes is New York Times bestselling author Jodi Picoult's most raw, honest, and important novel yet. Told with the straightforward style for which she has become known, it asks simple questions that have no easy answers: Can your own child become a mystery to you? What does it mean to be different in our society? Is it ever okay for a victim to strike back? And who -- if anyone -- has the right to judge someone else?

Halfway through the novel, I was engrossed. I couldn't wait to find out what would happen next - what Peter's motivation truly was, what secrets Josie was keeping buried inside. I felt such sympathy for each of the characters, dealing with a situation none of them could ever have imagined.

But somewhere around the 3/4 mark, I just started losing interest. I think, perhaps, the 500-page tome just went on a little too long for me. I could feel myself getting impatient, wondering when it was going to end - even, quite honestly, skimming a little, just so I could get to the end. And I found the end disappointing. The "big reveal" seemed to be almost an afterthought, coming at page 489 of 502. It seemed like I had been waiting and waiting for this, only to have it rushed through. And, honestly, I had suspected this ending from just about halfway through, so it wasn't even that big a surprise.

Having said that, I was still able to appreciate what Picoult does best - giving her readers the opportunity to explore a tragic situation from the point of view of ALL involved. She is a master at eliciting sympathy for the one who would traditionally be the "bad guy", and this talent was apparent in the character of Peter, the high school misfit who commits an unspeakable crime. I love the way Picoult gets into the heads and hearts of each of her characters, and this was certainly not lacking in this novel.

Additionally, her portrayal of the pain and disillusionment of being a teenager was brilliant. The drive to fit in; the fear that one misstep will cost you your status and friendships; the pain of being tormented; the ache of being abandoned by someone you thought you could trust. It was all there, and often painful to read.

"There's a word we learned in social studies: schadenfreude. It's when you enjoy watching someone else suffer. The real question, though, is why? I think part of it is just self-preservation. And part of it is because a group always feels more like a group when it's banded together against and enemy. It doesn't matter if that enemy has never done anything to hurt you - you just have to pretend you hate someone even more than you hate yourself."

While this was not my favorite of Picoult's novels, it was a fine read, if a bit too long for me. I would anticipate it being appealing to fans of Picoult's previous work - mostly, it was a solid piece of storytelling.


If you would like to co-host a week of By the Chapter, drop Marcia a line. It's a lot of fun!
Posted by Elizabeth at 5:37 AM

I enjoyed this even though I found the subject matter difficult to read about.

Thank you for hosting with me this week. For the most part I think we picked another winner. This is a topic I think would drive a lot of discussion if readers were gathered together. I love how she draws me into her stories and gets me emotionally involved with the characters. I was back in high school more than I wanted to be reading this story. LOL

Knowing that neither of us want to 'give' the story away my reference to the kid with a secret was Josie. I didn't see her role in the locker room coming though maybe I should have. I knew where Peter's story line was headed so no big surprises there. I was disappointed in the very end of story (Alex) but up to that point found the rest of the story engrossing reading.

I agree with you that this wasn't Picoult's best but it wasn't her worst either. I read it when it first came out so the details are a little hazy but I do remember the basics and I do remember feeling (a little) sympathy and understanding for the "bad" guys. She does have a way of making you see everyone's point of view -- as you said. Good job.

(Diane) Bibliophile By the Sea said...

I've read all of Jodi P's books, and for me this one was about a 4/5. Glad you enjoyed it.