Review - A World I Never Made by James LePore 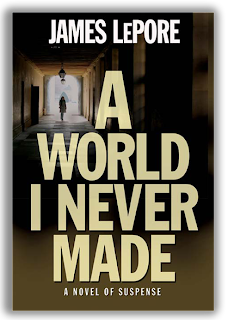 Pat Nolan, an American man, is summoned to Paris to claim the body of his estranged daughter Megan, who has committed suicide. The body, however, is not Megan's and it becomes instantly clear to Pat that Megan staged this, that she is in serious trouble, and that she is calling to him for help.

This sends Pat on an odyssey that stretches across France and into the Czech Republic and that makes him the target of both the French police and a band of international terrorists. Joining Pat on his search is Catherine Laurence, a beautiful but tormented Paris detective who sees in Pat something she never thought she'd find-genuine passion and desperate need. As they look for Megan, they come closer to each other's souls and discover love when both had long given up on it.

Juxtaposed against this story is Megan's story. A freelance journalist, Megan is in Morocco to do research when she meets Abdel Lahani, a Saudi businessman. They begin a torrid affair, a game Megan has played often and well in her adult life. But what she discovers about Lahani puts her in the center of a different kind of game, one with rules she can barely comprehend. Because of her relationship with Lahani, Megan has made some considerable enemies. And she has put the lives of many-maybe even millions-at risk.

I really enjoyed this novel. I was a little reluctant at first - based on the synopsis, it sounded like there was A LOT going on. I wasn't sure an idea that sounded this ambitious would actually pan out. So I was quite pleasantly surprised to find myself engaged with the characters and action of the novel immediately.

This is a thriller, so of course the action drives the story. LePore has packed his novel with serious, nail-biting suspense. Nobody is safe, and I had quite a few nervous moments, hoping my favorite characters would make it. (Sometimes they didn't.) There were a couple of instances where the coincidences seemed a LITTLE too good to be true, but for the most part the action seems very believable.

Sometimes authors have trouble with the two-narrative approach, but LePore does a great job transitioning from Pat's story to Megan's, and back again. Each story builds in intensity, so the reader is drawn in more and more, until eventually they can't wait to read what happens next. The characters and their relationships were somewhat predictable, but not enough to distract from the increasinly gripping storyline.

A World I Never Made is a highly entertaining novel - a great debut. I will certainly read LePore's next work - I can only hope it will be this much fun!

Julie has given me a short excerpt from the book that I will post tomorrow - make sure to stop back and check it out!
Posted by Elizabeth at 9:50 PM

Elizabeth...I have a couple of awards for you on my blog :)

I love action packed thrillers! Sounds good to me.

That excerpt really hooked me. It sounds really intriguing, I will have to look for this one, thanks!

Violet - thank you so much!

Bermuda - it was a great thriller. I don't read enough of this genre!

Zibilee - I'm glad you enjoyed the excerpt. It was a good book!