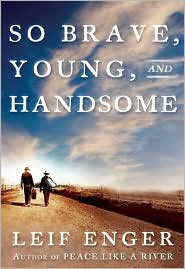 A stunning successor to his best selling novel Peace Like a River, Leif Enger’s new work is a rugged and nimble story about an aging train robber on a quest to reconcile the claims of love and judgment on his life, and the failed writer who goes with him.

In 1915 Minnesota, novelist Monte Becket has lost his sense of purpose. His only success long behind him, Monte lives simply with his wife and son. But when he befriends outlaw Glendon Hale, a new world of opportunity and experience presents itself. Glendon has spent years in obscurity, but the guilt he harbors for abandoning his wife, Blue, over two decades ago, has lured him from hiding. As the modern age marches swiftly forward, Glendon aims to travel back to his past--heading to California to seek Blue’s forgiveness. Beguiled and inspired, Monte soon finds himself leaving behind his own family to embark for the unruly West with his fugitive guide. As they desperately flee from the relentless Charles Siringo, an ex-Pinkerton who’s been hunting Glendon for years, Monte falls ever further from his family and the law, to be tempered by a fiery adventure from which he may never get home.

To be perfectly honest, I wasn't terribly excited when my mom gave me this book to read. I didn't really enjoy Enger's first novel (Peace Like a River, one of my mom's all-time favorites), and when I heard the premise of this one, I thought there was no way I was going to like it. One again, MY MOM WAS RIGHT! You'd think I would have this concept figured out by now - my mom is always right.

Here's why this is a great book - it's a WESTERN, and I LIKED it! See, westerns are not my thing. Cowboys, and shootouts, and outlaws - really not that interesting. This book had all of those things, and yet I couldn't put it down. Why, you ask? Because the story itself was so good.

Becket, Glendon, Siringo, the young Hood, Susannah, Redstart - Enger's characters sparkled across the pages, funny and sincere, each trying to do good in their own way. They each had something a little unexpected about them, an edge I didn't see coming, that made me want to read more about their adventures.

And the writing - boy, Enger can sure tell a tale. He knows how to choose words well, and even when I wasn't completely captivated by the narrative, I wanted to keep reading to see what Enger would write next. Here are some of my favorite bits -

"In this way I crossed over. In this way I slid apart from all that was easy and comfortable and lawful; and so tired was my bandit friend that I took the oars myself and rowed facing forward. You just see better, standing up, and I enjoyed the feel and sound of the sweeps, and not until we were miles upriver did I remember my clothes and grip, back at Royal Davies's house, and my unfinished letter to Susannah, abandoned on his dock."

"In the accounting of debts there are few bigger or less compensated than those I owe to young Hood Roberts. There was his work on the Packard, of course, and we all know a good mechanic is worth his weight in precious metals; that aside, Hood was the purest liar I ever knew. He lied for profit as many do but he also lied for joy, which is less common - it may be he even lied for beauty, by some deeply buried rationale."

" 'It's peculiar, to reach your destination,' he told me. 'You think you'll arrive and perform the thing you came for and depart in contentment. Instead you get there and find a distance still to go.' "

I was truly captivated by this novel from page 1. I remember a while back someone was looking for a recommendation for a Western to read for some challenge - pick this one! Even if you don't like the genre, I think you might end up surprised by how much you like this book. I liked it so much I'm going to give Peace Like a River another try - I have a feeling my problems with it the first time through might have been as simple as the wrong book at the wrong time.

I've been wanting to read this one. Glad you liked it!

You and I are lucky to be from families that read. My hubby's family doesn't. I'm glad your mom was right.

This is so intriguing - you may like this one better than Peace - I would put Peace #1 and this one #2. So, maybe we don't actually share the SAME brain???

I read this one recently and haven't reviewed it yet. I liked it, but I actually liked Peace Like a River better. He's definitely a great story teller!

Haven't read anything by Enger so far. But I really love the title, it's very interesting. Great review though, don't you just love it when you can rate a novel as high as 9/10?

I absolutely loved both of his books - and I'm not sure I could pick a favorite. I'm surprised you like one and not the other.

My book club is discussing this one tonight - I think i might bring your review along and read it to them!