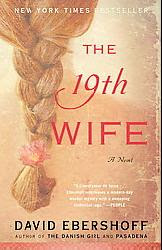 Faith, I tell them, is a mystery, elusive to many, and never easy to explain.

It is 1875, and Ann Eliza Young has recently separated from her powerful husband, Brigham Young, prophet and leader of the Mormon Church. Expelled and an outcast, Ann Eliza embarks on a crusade to end polygamy in the United States. A rich account of a family’s polygamous history is revealed, including how a young woman became a plural wife.

Soon after Ann Eliza’s story begins, a second exquisite narrative unfolds–a tale of murder involving a polygamist family in present-day Utah. Jordan Scott, a young man who was thrown out of his fundamentalist sect years earlier, must reenter the world that cast him aside in order to discover the truth behind his father’s death.

And as Ann Eliza’s narrative intertwines with that of Jordan’s search, readers are pulled deeper into the mysteries of love and faith.

If you like historical fiction, you need to read this book.

David Ebershoff takes two distinct narratives, adds faux-historical documents, letters, and Wikipedia entries, and comes up with a completely engrossing look at the history of polygamy in America. This is a case of a hugely ambitious idea - multiple narrators, different time periods, the blending of history and fiction - that absolutely gets it right. I was grabbed by the first page, and by the end of the 500+ page novel didn't want it to end. 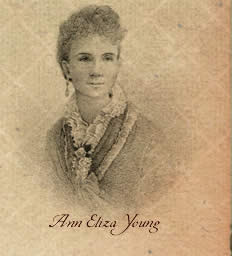 One of my favorite things about the novel is the way Ebershoff allows each person - Mormon, nonbeliever, polygamist, apostate - to tell their story without judgement. Everyone's voice is heard and respected. That doesn't mean, however, that difficult questions are not addressed:

" ' Why do they keep on believing all that crap? Where's the skepticism? Why don't they ask themselves - just once, that's all it would take - why none of it makes sense?'
' If it's the only thing you know ---'
' No, that's not it. I mean, sure, yeah, if it's all you know it's hard to imagine anything else. But I'm talking about something different. I'm talking about why they never once have any suspicion that something's not right. You don't need to know anything to have a doubt. You just need to listen. To yourself. Why are so many people so lousy at listening to themselves?' "


Once again, this is a book that, for me, completely lived up to its hype. If you haven't read it, find a copy! It's a fascinating look at a lifestyle so many of us can't even begin to comprehend.

Don't just take my word for it! Stop by the other hosts of this blog tour, sponsored by TLC Book Tours:

Posted by Elizabeth at 5:28 AM

I really enjoyed this book, too, even though I thought the middle got a little bit long.

I am so glad that you liked this one! I have heard great things about this book and think it would be perfect for me, as I love historical fiction.

Wasn't this one great? I really enjoyed it as well. The historical bits were definitely my favorite, but I was also really interested in the lost boy stories. I ended up doing a lot of research after finishing this book.

The historic thread is fascinating, providing a glimpse into the repercussions of plural marriage on the wives and children who were trapped by it, and the husbands who adhered to the practice but found the practicality of maintaining several wives less appealling than the ideal. Ebershoff is best when imaging the voice of Ann Eliza, who broke from Brigham Young and the church to lobby the nation, Congress and President Grant to put an end to the institution of polygamy. He does an excellent job of painting the historic characters as multifaceted people, with the protagonaists at times acting selfishly and the antagonists, even Brigham Young, depicted as fallible humans who harbor good in their hearts even if they perpetrated anguish on others. The historic tale also provides an interesting treatise on religion, blind faith, and being human.