Movie Review - Let the Right One In

12-year-old Oskar lives a very lonely life. His parents are not together, and each seems to busy with their own lives to pay him much attention. He is bullied horribly at school, and doesn't have anyone to turn to. When he meets Eli, the new girl who has moved into his apartment building, she tells him she cannot be his friend - nothing terribly new. But she keeps hanging around, talking and asking questions, and soon a relationship develops that surprises them both.

Eli is......not your average girl. When Oskar discovers her secret, he is intrigued, and as situations deteriorate for each of them, they must learn to rely on each other for their very survival.

This is a movie where it's almost better to NOT know a whole lot about the plot - because the twist, when it comes, is pretty surprising. Oskar is lonely, ignored, bullied - so the lure of Elie's dark world isn't surprising. Watching the unfolding horror was mesmerizing. This is not a traditional horror flick, although it has its share of gore, but rather a psychologically terrifying story as the truth of the situation becomes clear. The two young principal actors were magnificent, capturing the essence of their damaged characters perfectly.

This movie will not appeal to everyone - it does develop somewhat slowly, so you have to have patience, and it does have a fair amount of violence and blood. But it is a story that you will not forget, I am quite sure!

This movie from Sweden counts toward the Orbis Terrarum film mini-challenge. 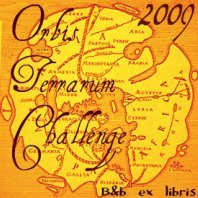 Posted by Elizabeth at 4:10 AM

Oh I've been wanting to see this so much! Thanks for the review!