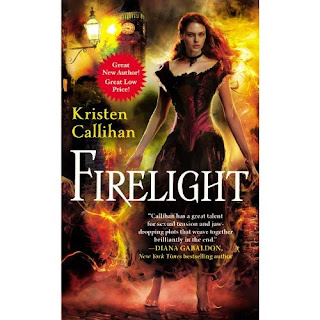 London, 1881
Once the flames are ignited . . .
Miranda Ellis is a woman tormented. Plagued since birth by a strange and powerful gift, she has spent her entire life struggling to control her exceptional abilities. Yet one innocent but irreversible mistake has left her family's fortune decimated and forced her to wed London's most nefarious nobleman.

They will burn for eternity . . . Lord Benjamin Archer is no ordinary man. Doomed to hide his disfigured face behind masks, Archer knows it's selfish to take Miranda as his bride. Yet he can't help being drawn to the flame-haired beauty whose touch sparks a passion he hasn't felt in a lifetime. When Archer is accused of a series of gruesome murders, he gives in to the beastly nature he has fought so hard to hide from the world. But the curse that haunts him cannot be denied. Now, to save his soul, Miranda will enter a world of dark magic and darker intrigue. For only she can see the man hiding behind the mask.

After reading something as intellectually and emotionally stimulating as In This House of Brede, I knew my next choice would have to be something almost completely different in tone and style. I often find I need to take a bit of a "mental break" after reading something that has challenged me - am I the only one? If I don't, the next book I read inevitably suffers for it, so I've learned to pick something that will be quick and easy, and hopefully very entertaining.

Paranormal romance is not a genre I read widely, so I won't claim to be an expert. I don't have a list of authors I can compare Callihan to, and I don't know if this story has been told to death or if it is a fresh, new idea. I just know it was a lot of fun. There was enough "Beauty and the Beast" for me to feel as though the story had a bit of familiarity to it, but Callihan created her own unique characters and events so that it wasn't just a straight re-telling. Miranda had plenty of spunk and spice, and the romance between Miranda and Archer actually felt like it proceeded in a somewhat plausible manner.

This is certainly the first novel in a proposed series, and if the next books are as much fun as this one, I might have to consider becoming a paranormal romance reader. I know this won't be for everyone, but I took a step outside my comfort zone and found myself richly rewarded. It almost felt like a palate cleanser, and I'm glad I took a chance on this one!

Posted by Elizabeth at 6:42 AM