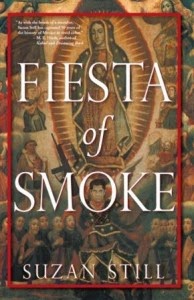 Against a backdrop of rebellion and intrigue, love between Javier Carteña, commander of insurgent Mexican forces, and Calypso Searcy, an American novelist at the pinnacle of her career, sizzles with passion across a broad sweep of history. Encompassing time from the Conquest of the 1500s to the present, the story races across space as well, from the forests of Chiapas to the city of Paris. There, an international investigative reporter named Hill picks up the swiftly vanishing trail of Calypso’s disappearance, and unwittingly becomes involved in one of the great dramas of the twentieth century and one of the great love stories of any age.

Fiesta of Smoke is an ambitious novel, full of life and passion. From the very beginning, Suzan Still's love of Mexico and its people is evident, and at the conclusion of the novel her readers are left feeling the same deep respect and admiration for this land and its inhabitants.

Because the novel covers such a long period of time, there are definitely places that, at times, felt a little slower than others. Still wants her readers to understand the history behind the conflicts in Mexico, and sometimes relating that history did impede somewhat on the momentum of the novel. That said, I can say honestly that I became quite engrossed in the history of this country. I have not read very widely about this part of the world, and Still's novel makes me want to change that.

While the novel has three main characters, I felt that Javier was the heart and soul of her novel. The book just felt more alive when he was on the page. He was abrasive and abrupt, full of pride and anger, and completely captivating. It was interesting for me to realize that Calypso, who was a strong character in herself, was not the driving force of the novel for me. While I was certainly intrigued by the motivations behind her actions, it was Javier that truly compelled me to keep reading.

There were certainly some parts of the novel that felt a bit slow, but overall I was quite entertained throughout the whole (lengthy) book. I found it to be a fascinating look at a period and a conflict I knew very little about. I would definitely recommend this novel to readers interested in this area of the world, or who just want an engrossing and well-written work of fiction.

If you are interested in other thoughts about the novel, check out these stops on its book tour -

I love books that are steeped in history so this one is going on my TBR list for sure!

Thanks for being on the tour.