A thirteen-year-old girl and her father live in Forest Park, the enormous nature preserve in Portland, Oregon. There they inhabit an elaborate cave shelter, bathe in a nearby creek, store perishables at the water’s edge, use a makeshift septic system, tend a garden, even keep a library of sorts. Once a week, they go to the city to buy groceries and otherwise merge with the civilized world. But one small mistake allows a backcountry jogger to discover them, which derails their entire existence, ultimately provoking a deeper flight.

Inspired by a true story and told through the startlingly sincere voice of a young narrator, Caroline, Peter Rock's My Abandonment is a riveting journey into life at the margins, and a mesmerizing tale of survival and hope. 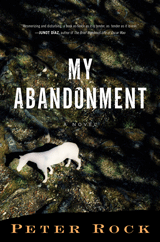 I saw this little book one day in the library, and picked it up on a whim - the title sounded interesting, and I have a weakness for interesting-sounding titles. I'd almost forgotten I had checked it out until I realized it was due back in a couple of days. I decided to read the first few pages, to see if I wanted to renew it, or just take it back, like so many others.

2 hours later, I was 3/4 of the way through the novel, and completely engrossed.

And I feel like I can't tell you too much about why I was so captivated, because it's a short little book, and there is a moment when all of a sudden you think, "Holy crap! Is THAT what's been going on???", and if I tell you too much, you'll know already what happens when you get there, and I don't want to ruin the surprise.

So, instead, I'll talk about Caroline, the brilliant, self-reliant young narrator who is almost impossible not to fall in love with. She is smarter than her years in many way, and yet also so completely naive in others. Her voice is unique, and was one of the things that made the novel so compelling. Here are a couple of excerpts, so you can have an idea of what I mean.

This is Caroline, describing where she lives in the forest:

"We come around the side and carefully he takes away the branch across the front door and then we sit on the edge of the mattress for a moment before he strikes a match and lights the lamp. The lamp is made out of a glass bottle with fuel in it and a string stuck through into it. Its light shines and deeper back in the cave the gold letter on my encyclopedias shine back. I only have up to I, but I haven't read past E....Inside the ceiling is tall enough that I can stand on my knees but Father has to sit down or crawl."

Caroline describing life in the city:

"These are the worst days. The rules and the way things work in the city are different, sharper and dirtier than in the forest but you can still be aware and stay out in the open enough not to get trapped and still not draw attention so people won't want to know who you are and what you're doing, a girl out alone in the city...If I see a police car or a policeman I am not to run away. I turn my face in another direction....There is alone time in the city but that means really that we are apart from each other not that we are alone since there are people everywhere. Mostly they are not looking at you."

"If one advances confidently in the direction of his dreams, he will meet with success unexpected in common hours. He will pass an invisible boundary. Don't forget this. Don't forget that thinking can get in the way. Forget the forgetting. We seek to forget ourselves, to be surprised and to do something without knowing how or why. The way of life is wonderful. It is by abandonment."

Everything about her life is craziness, and yet there is a strange logic to it that almost lulls you into thinking it's okay. Really, it is so hard to describe the mood the author is able to create with this novel - he makes you ALMOST understand why Father thinks and lives the way he does. It's amazing writing.

I highly recommend this novel. I will be looking for more work by this author - he has a book of short stories that sounds equally fascinating.

What a compelling review! I just put a copy of this book on hold at my library, and I can't wait to read it. Thanks!

Your review is fantastic. I really want to read this now. I shall definitely add it to my list. It reminds me of an adult's version of Nim's Island. Thanks for sharing. Happy Sunday Salon.

So, when I first read the publisher's synopsis, I thought, "Maybe this is a little like My Side of the Mountain." But - I guess NOT.

I would be interested in this one just because it's inspired by a true story.

This sounds fantastic Elizabeth. I too like that it is based on a true story. Undiscovered gems like this are the wonderful part of blogging!

Thanks for this review. The book sounds fantastic and I'm putting it on hold at my library.

Awesome review. I can tell I'm going to love this book too. I am adding it to my wishlist. Thanks for the review Elizabeth. I love the passages you have chosen, especially the one from the forest.

now i am thoroughly intrigued!
going to have look for this next time i go to the library.

Julie - I hope you enjoy it!

Scrap girl - I haven't seen Nim's Island, but I can see how there might be similarities.

Mom - no, definitely not. Much darker.

bermuda - I couldn't find much about the actual true story, but I wish I could, because it sounds fascinating.

Luanne - I LOVE when I just stumble upon a great book like this.

Gavin - I sure hope you enjoy it, too!

violet - the writing in this novel was absolutely beautiful. I hope you like it!

jehara - I hope you find it. I'm seriously considering finding a copy to keep for myself!

I am definitely going to try to get my hands on a copy of this one, it sounds absolutely amazing! Glad that you found this one in your pile and gave it a read. Awesome review!